Tada!  I am very happy to report that at long last I have achieved my goal of reading 40 books in a year.  And what's more, with school breaking up early this Christmas, I harbour a sneaky hope that I might even surpass that total.

It has been a good reading year.  In the quiet week between Christmas and New Year I will offer the KarenMartinReads review of 2017 and aim to give you my top 10.

But for now, the final two titles of the golden 40 were The Penelopiad by Margaret Atwood and The Child in Time by Ian McEwan. Both were charity shop purchases and eagerly bought.  I had wanted to read the first of the Myth series by Atwood ever since a former student had used the chorus as the backbone for a creative transformation of the text.  I'm now more diligent and read every base text that my A-Level candidates select, but back then I was content to read only the relevant extracts. (Apologies Lizzie, if you're reading this, but if I remember rightly, your grades came out perfectly)!

The Penelopiad is a short read and takes a feminist view of Homer's account of The Odyssey. Having

read that at university many moons ago, I was interested to see Atwood's perspective.  In short, she tells the story from Penelope's, (Odysseus's wife) point of view.  The tale tells of a marriage bargain and the loneliness and trepidation of a young girl made to sail from her home to the unknown and much smaller island of Ithaca.  Once there, she sets about becoming a good wife, fulfilling the traditional roles expected of her and negotiating around proprietorial nannies and servants.  When Odysseus leaves to rescue Helen from the arms of Paris in Troy, Penelope is left alone and vulnerable.

Atwood portrays her protagonist with strength and conviction.  Wanting her husband to be proud of her on his return, Penelope sets about maximising his assets, growing his production and increasing his yields and his livestock.

With Odysseus's failure to return long after the other adventurers had been reunited with their families, others began to assume him dead.  Rumours circulated and once more Penelope was vulnerable.  Prospective suitors, wooed by her increased wealth and assets set up camp.  She was obliged to show hospitality and they plundered her crops, her foodstores, her livestock and her maids.

And it is here that the story is really interesting. Atwood uses the Greek dramatic device of a chorus throughout the novel.  This is voiced by the 12 maids and is often in deliberate poetic construct.  These maidens were a central part of the ending of the original tale - central because Odysseus ordered their deaths.  Even if you didn't know the original tale, then this isn't a spoiler: they announce their own demise very early on in the book.

Atwood constructs her book around the maids, making their voices even more compelling than Penelope's.  Perhaps because they have no privilege and are, in effect, prisoners to the role that life has assigned them, Atwood gives them a voice and it is a powerful one.  They are not meek and they do not die quietly.  Even in Elysian Fields, the maids give Penelope no peace.

Atwood's depiction of Elysium is amusing; the main characters continue their feuds beyond the grave.  Helen of Troy remains smug in her beauty and ability to woo any man; Penelope remains jealous of her cousin.  Odysseus is condemned to disquiet, choosing reincarnation multiple times with little success and little evidence of having learnt from prior experience.

This novel was both lighthearted and challenging. Anyone who is interested in this reworking, might also like the poetry of Carol Ann Duffy in The World's Wife, where she re-imagines real and fictional male characters through the voices of women who loved them.

And having your own voice is important.  No-one should be overshadowed by one that is louder or more insistent. We all need to be heard in order for us to have a sense of self, a conviction of our own worth. We all need someone who thinks we are worth listening to. 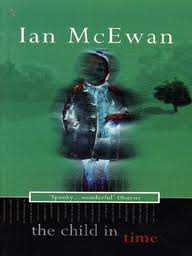 In Ian McEwan's novel, introspection is at its heart.  The protagonist opens the book with an ordinary life in an ordinary family.  This quickly changes when his daughter is snatched at a supermarket and suddenly he is capitulated into a life which is extraordinary for all the wrong reasons.  The loss of his daughter, Kate occurs in chapter one and the rest of the novel shows how he copes, how he goes on from there.

And it is significant that the loss of identity brought about by such grief, robs Stephen of his voice.  He doesn't know what to say or who to say it to.  His wife Julie, responds similarly, retreating into herself and then going away. Other key characters, Charles Darke and his wife Thelma, and Stephen's parents, all keep silent, all keep secrets and in doing so, seek to protect themselves from the outside world.

There is a thread of truth running through the whole novel.  Working for a government sub-committee, Stephen exposes a deceit.  His ultimate conclusion is that in public office, civil servants work between the lines of truth and lies and nothing has any integrity.  As is often seen in McEwan's fiction, he also makes a nod to science.  In this novel he examines the concept of time through coincidence, hallucination and the paranormal.  In all of this Stephen is seeking meaning, trying to make sense of what has happened, who he is and what he is to become.

This is a beautiful story, told with typical McEwan control.  The novel seems episodic, with some vignettes seemingly random in their inclusion.  But the master storyteller draws all these elements to a pleasing conclusion and not a word has been erroneous or wasted.

The overall impression is of an evocative novel that explores the interior life of an ordinary, decent man. The ending is wholly satisfactory and I would be interested to hear whether any of you predicted it.  I'm left with an optimistic view of humanity, and with the novel's bleak premise, that is a pretty amazing feat.

So now to watch the film version with Benedict Cumberbatch and see if TV can evoke as effectively as the real thing!
Posted by Karen Martin at 14:25 No comments:

Perhaps deciding to read White Teeth by Zadie Smith this late in the year was not my wisest choice.  I now need to complete two further books in order to meet my target of 40 reads in twelve months.  Hubby suggested I borrow Child One's infant school readathon tactics and start on the Mr Men books! Though my next two reads will be less than 500 pages (I'm leaving Human Traces by Sebastian Faulks until 2018!), I'm also keen to try and squeeze in a poetry anthology by Inua Ellams.

Poetry has always been something I have enjoyed studying, but I have never managed to make that move to reading it for pleasure or relaxation.  I do have favourites: Mother, Any Distance by Simon Armitage catches in my throat every time I read it aloud, so beautifully does it capture the love of a mother as her children leave home.  And now I have found a new voice to enthuse about: Inua Ellams was recently at Norden Farm, our local independent theatre, and, in an intimate studio, he read from his work.

The set was titled an Evening With an Immigrant and so I really wasn't sure what to expect.  My sixth
form students are reading for a module with immigration literature at its heart, so we took a leap of faith and booked tickets for the class.  To be honest, with a title like that, I was expecting it to be satirical, comical, light.  And it was entertaining.  Inua is personable and genuine and some of his stories made us laugh.  He appeared on set in a Nigerian robe and bounced in to some African drumming.  But there the stereotype faded.  He punctuated the reading of his poetry with the most powerful autobiographical tales that made us want to weep both with him and for him.

Having fled Nigeria for fear of their lives, Inua arrived in England aged 12 with his parents and siblings. The family were then defrauded of their papers and had to flee again, this time to Ireland. Here, they were subject to taunts and abuse.  When his parents received photographs of his sisters on their phones, accompanied by threats, they had to move on again.  By the age of 18, Inua was back in London but still without papers and without much hope.  Now in his thirties, he tells a tale of immigration that is heartbreaking and real.  The poetry of his experiences is rhythmical, beautiful and good.  When asked how he could write with such generosity and love when he and his family have been so rejected, his reply was simple: if we cling to hatred and bitterness, that is what we become.  Despite everything, love and compassion shine through his work. And I have another poem to add to my favourites, Dear Tina.

It doesn't take much insight to realise that I am a bit disillusioned with the current education system with its emphasis on exams and assessment and constant monitoring of data, but I am so glad that I still have opportunity to take young people to events like this.  That evening alone was worth more than an A-Level grade.  Listening to the experiences of others broadens our horizons and increases compassion.  The world needs to hear voices other than their own.

And that leads me nicely to White Teeth. I confess I have looked at other reviews before writing my blog, something I usually avoid doing... but this novel is huge and I had no idea how I was going to encapsulate it.  It was therefore something of a relief that professional reviewers had the same difficulty.

The plot is complex and, in places, bizarre.  In essence it asks big questions: who are we and how do we fit in?  How do we accommodate others?  How do we seek our own contentment?  Against a background of socially and culturally diverse Willesden in London, Zadie Smith focalises alternately on the two men, Samad and Archie and then their children, twins Magid and Millat and a daughter Irie. The book explores the experiences of second-generation immigrants and their families, but it is not a politically correct investigation of immigration.  It seeks to tell you the stories of the array of characters and somehow weave them all together in a climax and denouement that is perhaps the weakest part of the plot.  If I tell you that it involves a mouse and eugenics, a clash of science and religion, a gun and a fundamentalist group under the acronym KEVIN, then you will begin to see what I mean!

For me the book was too busy to either fully absorb or enjoy. It is Zadie Smith's debut novel and I would be very interested to read some of her later work. If any of you have any recommendations for me, do let me know. She writes well, and she captures the messiness of life in which we all scramble around.

The novel achieved critical acclaim and launched a highly successful career.  It is her originality and fearlessness that impressed me the most. She dares to write what others might even avoid thinking.

And for the record, my favourite character is Abdul-Mickey, the cafe owner of O'Connells!

Now, off to read super-fast and achieve that elusive 40 in a year! I'm starting with Margaret Atwood's The Penelopiad, and I'm already a quarter through.  With any luck, I'll squeeze in two reads and a blog before Christmas, so I'll save my festive greetings 'til then!
Posted by Karen Martin at 11:56 No comments: