It's been a month since I was here last.  I have been reading, but the blogging seems to have suffered under the dual delights of revision classes for my year 13 A Level class and a series of busy weekends.  I have packed off child 1 for a month-long tour of Europe; she is fulfilling a long-held dream in the vacuum between finishing uni and becoming a real adult!  Meanwhile child 2 is home for the summer.  I have challenged him to read a book a week and he is encouraging me to keep up my blog!

My reading has been eclectic over the last few weeks.  I have completed Castle Dor by Daphne du Maurier, The Light Between Oceans by MLStedman, Surprised by Grief by Janine Fair and today I have finished Naomi Alderman's The Power. 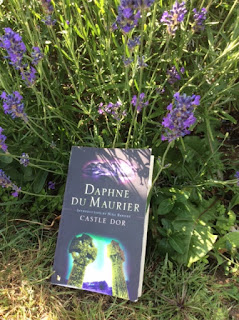 I can dust off Castle D'Or and Surprised by Grief  quite quickly.  The former I dug out in a charity shop in Stratford-Upon-Avon and it interested me as it was a title begun by the literary critic Sir Arthur Quiller-Couch, "the legendary 'Q,'" (whom I have to admit, that I had never heard of ) but left
unfinished at his death.  His daughter then asked du Maurier if she would consider completing the project.  Knowing du Maurier to be an excellent teller of tales, this one, with Tristan and Iseult at its heart, appealed.  I also wanted to see if I could tell where Quiller-Couch had stopped and du Maurier had picked up. There is tacit acknowledgement of this point of deviation from one author to another,when "It is a curious coincidence that no poet, or shall we call him investigator, has ever lived to conclude this particular story.  His work has always been finished by another." It is also moot that that was the point when the reading became more enjoyable. Despite this, the novel never quite matches up to other works by du Maurier; it is evident that she is hemmed in by what had been drafted already and neither the story nor the characterisation is compelling. Unless you are interested in the dual authorship, then you can give this a miss with clear conscience. 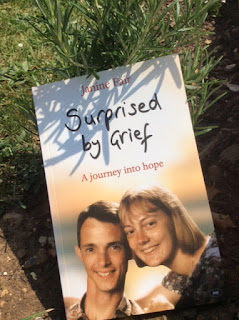 Surprised by Grief  is an autobiography of a vicar's wife who found herself suddenly widowed with two young children.  The book is an account of her sadness and desolation, but also her hope. The book covers the first three years following Richard's death.  I was most struck by how the emotions she expresses can be seen in others following trauma, family breakdown or other significant loss.  It speaks of accepting help and love at the beginning, but then feeling trapped by the perceived need to be seen to be coping. This need led her to turn away from offers of love and help and she, in turn felt isolated and rejected.  Such complex contradictions were part of the insight gained in this book.  It is told from a Christian perspective and she also draws on her dependence on God and the process of becoming stronger in her identity in Christ and in her identity as an individual as opposed to someone's wife.  This was an honest and insightful read, though the writing is not as finely tuned as a professional writer's might have been.

Hubby has just come over to the decking where I am typing this and he has reminded me that he is not a fan of my multiple book blog entries! Do leave feedback for me on this; if lots of you share his opinion, then I will stick to single title reviews where possible.

In the meantime, I will plough on with The Light Between Oceans,with a shout-out to cousin Lin who recommended this one for me. (And yes, the Elizabeth is Missing title on your shelves is indeed mine; I checked!) I was wary of this recommendation as my much-loved cousin purports A Prayer for Owen Meany to be her favourite book! Still, she challenged me to read this one without weeping, and I accepted.

The book is a compelling story, one I completed in two days.  The premise is that of a young veteran 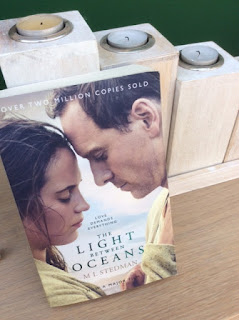 who seeks a new life after the horrors of WW2. He finds balm in a solitary post as lighthouse-keeper off the remote and tiny community of Partageuse.  The writing is immediately evocative as Stedman describes the island of Janus, the ocean and the lights so sensuously.  Indeed, the lighthouse is almost a character in its own right.  Happy in his solitude, Tom is almost taken by surprise when,during shore leave, a younger woman makes known her affection for him.


What follows is a tender love story.  Tom is finely drawn and readers respond well to both his gentleness and his reason.  He embodies strength, both physical and emotional, and is a pillar of love for his new wife as he engages her with the rhythm of island life.

The book revolves around Izzy’s need for a baby.  Suffering two miscarriages, she becomes increasingly sad and thus when a boat is washed up with a dead man and a small baby on board, she puts Tom into a complex dilemma. His love for her overrides his sense of right and wrong and he allows himself to be persuaded to falsify the lighthouse records and keep the baby on the island.

This becomes the central plot.  Even as he writes a false account of the day in his log book, you realise that such a deception cannot have longevity.  Tension is created between the couple at the same time as they unite in love around little Lucy.

The story develops around this point of tension. Izzy is so blinded by her love of the child and the intense need to mother that she becomes twisted in her logic and defiant in the face of moral reasoning.  But events find them out and the child is at the centre of a desperately sad situation as the community of Partageuse seeks to mete out justice.

The Light Between The Oceans is an easy read and well-crafted.  The plot is compelling, even if it isn’t always convincing.  I found it hard to marry Tom’s strength of character with his decision to keep the baby on the island. His love for Izzy is tangible and it is this that persuades him to listen to her arguments for nurturing the baby on the island.  I remained unconvinced, even though Stedman conveys his disquiet empathetically  throughout the playing out of the deception.

The book does however capture what it is like to love someone deeply. Despite my lack of suspension of disbelief in places, Tom is a finely drawn character who has lodged himself in my heart as one of my favourites.

And despite my best efforts to write about four titles, I am going to stop here.  Naomi Alderman, as winner of the Bailey’s Prize for Fiction with the book, The Power, deserves a full blog entry.

Keep an eye out for it; I’ll post it soon…before I get too engrossed in my next read! And in case you're wondering, I didn't cry at any point during my reading of The Light Between The Oceans!