Post 53: Persuasion...a rumination on Jane Austen and the modern woman! 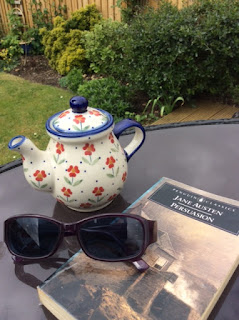 china teapot, Teapigs tea and a Jane Austen novel.  Bliss.  There is nothing quite like a pot of tea properly brewed and whilst, like most of you, I dunk a bag and run most of the time, a patient brew is the best.  Jane Austen novels have the same feel to them. These are not to be rushed, but to be savoured and enjoyed time and time again.

I was prompted back to Jane after seeing a competition to rewrite the ending of one of her novels in 500 words. This is easier said than done. The word limit means that you can't significantly alter the story, but more than that, Jane Austen, unlike many modern authors, actually completes her novels. All ends are tied and all the characters are rewarded or chastened as befits their conduct.

So it was that I revisited Persuasion. This was my first experience of Austen, taught for A-Level circa 1987! I had brilliant A-Level teachers.  They lifted my love of reading to an appreciation of literature.  I literally swapped Shirley Conran and Mills and Boon for E.M.Forster and Jane Austen. For that, I have a lifelong debt of gratitude to Messrs Williams and Naylor of Cirencester Sixth Form. It saddens me that the restrictions on curriculum and the unmitigated pressure to achieve exam success has lessened the opportunity for teachers to pass on the love of a subject.  My first term at A-Level consisted of Messrs Naylor and Williams teaching their favourite texts by way of an introduction to the course.  Such diversions are likely to deemed unjustifiable today and the students themselves would see little point if it wasn't on the syllabus.

I still love an Austen novel.  The array of characters, the liberal hope of independent thought amongst small-minded convention and the sheer pleasure of slowing down to the pace of nineteenth century gentility is a pastime all should indulge in every once in a while. It makes me want to address hubby as Mr Martin and spend my days walking and leaving the odd visiting card here and there!  Despite Jane Austen's own independent spirit, earning her own living and remaining single, her heroines are singularly in pursuit of happiness and some material security.  These desirabilities are inevitably to be found in the attentions of a good man.

Where the method may have changed in modern life, I think we still pursue contentment and security. But we are, thankfully, not so hemmed in by the very nature of our sex.  We no longer "live at home, quiet,confined.." whilst the men "are forced on exertion [with] always a profession, pursuits, business of some sort or another."

What would Anne Elliot have done with the freedom of 21st century life?  I think she would have left her hapless father and superficial sister (who would have been an instagram sensation with lots of followers but no friends) and gone to university.  She would have gone despite the lack of funds from said father, and she would have paid her own way by playing barista in her spare hours.  I like to think though, that she would still have found her Captain Wentworth.  But she wouldn't have been open to the cautionary prohibition exacted on her by Lady Russell. She would have met him at 19, finished her studies and worked for a year or two.  She would have defied her family's disapproval and together they would have forged their way in the world, not even being too bothered that they were proving the others wrong.  But, because she is tenderhearted and kind, she would be a nurse or a doctor, a social worker or a family lawyer. She would care for others, love her man and retain a sense of self-respect and self-esteem that wasn't dependent on his approbation.

No more do we sigh at home and hope for opportunity.  No more do we faint away at the sight of an accident on the Cobb or lie-in for weeks on end because of a minor concussion. But at the heart of an Austen novel is always the potential for modernity.  Mrs Croft is the example in Persuasion; liberated enough to defy convention, remain childless and travel the world with her husband.  But she too, was defined by his role. The idea of total independence was perhaps a tad too radical for Jane.

As for an alternative ending, I'm not sure.  Jane Austen herself wrote two versions of the denouement which are readily available, (and a great example of good editing and redrafting for the modern writer), but the romantic in me can't conceive of Anne Elliott  forever without Fredrick Wentworth.

I may be a modern woman, but I am still a sucker for a conventional happy ending!

It is always a luxury to come to school holidays and be able to write a blog entry immediately after finishing a book.  I love that bittersweet feeling of turning the final pages.  The story is over, but the narrative carries on in your head for a little while afterwards.  You find yourself reflecting, wondering, extending the stories of the characters and letting them live on a little longer.

And that is where I find myself now.  I'm poised halfway between the reality of getting dinner ready for an hour's time, and the stronger urge to stay in the story I have just finished.  This book was a reward of patience for me.  I heard author Harry Parker speak at the Henley Literary Festival in the Autumn, and really wanted to buy his book.  Now loyal blog readers will know that I am a sucker for a signed copy, but I am, I must confess, also a lover of the paperback.  Hardbacks maybe majestic, but they mess up my shelves a bit, and to be honest, they are a little pretentious!  So I waited.  I dropped strong hints around my birthday by casually leaving my Amazon wish list open.And finally, not being fully confident in hubby's ability to pick up hints (!), I pointed out the title online, (possibly more than once!)

And so it was a delightful surprise, on my birthday, to open the only shocking pink book that I possess!  And it is this novel that I have just finished devouring.  Not sure why its cover is so lurid, but that's by-the-by.
Anatomy of a Soldier had me hooked from the moment Harry Parker explained his narrative strategy from the stage of the Kenton Theatre in Henley. Each chapter is narrated by an inanimate object. They tell their part of the tale and then sign off.  I love a unique narrative voice, and this intrigued me.

Chapter 1 opens with the story of the tourniquet used to stem the blood flow as"fear and pathetic hopelessness gripped BA5799."  This is a highly engaging start, as immediately the reader wants to know the identity and personality of the injured man.  The use of serial numbers, clipped sentence structure and rigid procedure evoke the military setting in which the story takes place. But the plot is not chronological and, through the objects, we get a full picture of life at base camp, the emergency military hospital,the intensive care treatment and the rehabilitation centre. Perhaps even more interesting is the wider picture gained of the war zone.  It is not named, but frequent contemporary news reports suggest that the dry landscape is that of Afghanistan.  Parker conveys, without romanticism or preamble, the tension of war in a landscape of insurgency.  The fighting is different, the violence sporadic and messy, and the fear constantly at the edge of consciousness. These complexities were portrayed with an honest voice.

As a former soldier who suffered horrific injury and subsequent amputation, it is clear that author, Hary Parker, drew on his own experiences in this book. He was adamant however, in the Q&A session at the festival, that protagonist, BA5799, or Captain Tom Barnes is not him.  He has, he insisted, fictionalised his life experiences.  But it cannot be doubted that such experience has helped to create authenticity.  Sometimes this is at the expense of empathy. At times, the objectified narration created a little too much distance between the reader and the action described, but when taken as a whole, with each story woven together to make the big picture, then a story is created that evokes understanding of insurgent, soldier and family members on both sides. It succeeds in creating a tale that is not self-piteous and doesn't result in the reader feeling sorry for Tom.  In short, it is an honest story of suffering, human resolution and determination.  These qualities are seen in BA5799 and in all the other players in this theatre of war.

I enjoyed this book and will be very interested to see how Harry Parker develops his writing career from this autobiographical starting point.  His style is succinct and the chapters short. Whether this is because of the nature of his narrative voice, or whether this will be a trademark of Parker remains to be seen.

I recommend that you read the book quickly.  If you sup at the odd chapter every now and then, you will lose the wider arc of the story.  I found the points where the plot evolved through being told by different objects quite exciting.  It was a bit like doing a jigsaw, (but WAY more interesting!)  The novel starts at the climax and then takes you back to the beginning and leads you through several strands of experience before the denouement and resolution.

Interestingly, I relate to the main character more as BA5799 than as Tom.  I wonder whether this is because he saw himself as a soldier first and foremost, or because many of the objects were etched in this identification mark.  It is only in England that he is referred to as Tom.  During active service, all the objects refer to him as his serial number, perhaps further dehumanising the whole experience of war.

Posted by Karen Martin at 13:34 No comments: