Post 49: where I both loathe and delight in half-term novels

This post is going to be almost totally devoted to Kafka On The Shore, but before I dive right in and get a little over-excited about that reading experience, I need to dispense of  two other titles completed since my last blog. My nerdy English-teacher book group met earlier this month to discuss Never Let Me Go by Kazuo Ishiguro.  I recommend this book heartily and point you in the direction of blog post 26.  I enjoyed the re-read as much as the first read and that is always a good sign that a book has "meat"!

My next review is going to be very brief. I was drawn to the novel by its inclusion in an A-Level anthology where the opening pages of the book were quoted.  This set up a delightful tension between reformists and traditionalists at a thinly-disguised Cambridge college.  In these early pages, the modernist ideology of Sir Godber Evans, the new Master of the college, seem laudable to any enlightened reader; but the resistance implied by the other academics who gorge on their opulent feast of swan and indulge in ever-flowing good wine, creates an excellent premise for a good plot.  Skullion, the Head Porter is effervescent in his disapproval of the new man and thus the stage is set for a war of privilege and principles.

Whilst I recognise that this novel is lighthearted, I hadn't expected absolute farce.  Other reviews have deemed it highly comedic; I'm afraid I found it bawdy and ridiculous.  To me, the plot had so much potential, but I wanted it to result in a different novel.  That Porterhouse Blue engendered many sequels is something that I cannot quite comprehend, as the ending was so totally unconvincing that any suspension of disbelief was totally arrested.  It was a relief when I finished it and it is with gratitude that I don't ever have to read it again.

I am glad, at this point, to tell you that I finished the Tom Sharpe novel on the train to London.  This meant that my Karen-alone-in-London-doing-her-reading-thing was not wasted on a book I loathed! So I headed up the Charing Cross Road to Foyles. I'm ashamed to admit that I had never been there before. But I made up for lost time, by perusing the shelves, taking a tea break, indulging in guilt-free
uninterrupted reading time and spending a joyful hour (or maybe three) just soaking up the whole blissful bookishness of the place. It was here in Foyles, that I opened the first pages of my next read... 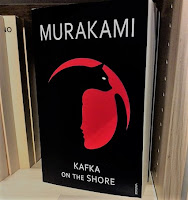 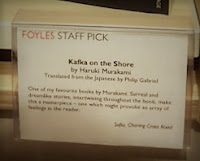 Reading Kafka On The Shore by Murakami is unlike anything I have ever experienced. Recommended to me by one of my students, (who, I might add, consumes book at an equal or faster pace than I do); I was intrigued to see what had captivated her. I was also delighted to see it as Foyles-recommends title, so I felt I was reading the right book in the right place.

This book precludes much explanation but instead demands more of a visceral, sensory, spiritual response.  The prologue almost made me put it back on the shelf: the protagonist is in discussion with some sort of alter ego, known as "The boy named Crow." It is apparent, even at this early stage of the novel, that this boy Crow is somehow a part of Kafka Tamura, the central character.  How this works is never fully explained, but by the end of the novel, there is a greater understanding of the symbiosis between them.

If you can see beyond this surreal, slightly disembodied opening, chapter one then goes on to set up the plot.  15 year-old Kafka is running way from home and at this point, we have no idea why. This works as an effective hook and the first person narrative builds some empathy with Kafka from the outset.  The second chapter then changes typeface and writing style as it reports on an incident, possibly chemical, that affected a class of Japanese schoolchildren whilst out on a field trip in 1944. Here context comes into play, and readers will wonder whether this might turn into an apocalyptic novel that draws on the horrendous aftermath of the atom bomb.  Essentially, mysteries are set up in these opening chapters.  We have no idea how Kafka relates to events that occurred years before he was born, but we are already seeking a resolution where one influences the other. This is further intensified by the introduction of the third set of key characters and events.  We are introduced to Nakata in chapter 6.  He is a man, advanced in years, who cannot read or write.  He realises that he used to have such knowledge but an accident earlier in his life robbed him of much of his intellectual and reasoning capacity.  We meet him talking to cats!  (I know, but stay with me, I implore you. It's worth it!)  By this juncture, my brain was reeling so hard from the assault of the opening section of the novel that I wasn't sure whether I was loving it or hating it, but I know that I was compelled by it.  I wanted to find out how all these elements      would tie together.  I was beginning to make connections and I wanted to see if I was right!

So, no spoilers, and whilst this is a novel that I could write a dissertation on (indeed that might be fun!), I will cut to the chase.  Child 1 tells me that my blog is only properly interesting if I don't get too bookish!

This novel is one of the most clever constructs that I have read.  It draws on Japanese religion, Greek myth and drama, Christian teaching, secular philosophy, fate and ideas associated with author Franz Kafka and probably many other allusions that I have missed.  At its essence is an exploration of who we are, of what it means to be human.  There are deaths in the book that prompt an examination of where we go next, and whether this life impacts the next. I was particularly struck by discussion of memory and forgiveness. We are encouraged to build
memories, to create safe places that our children can look back to.  When facing the death of a loved one we are encouraged to make memory boxes, to keep them in some ways alive for us.  But this novel challenged that way of thinking.  Characters are trapped by their memories, they are held back by the past.  This leads Miss Saeki to lead a half-life as she constantly looks back.  In comparison, Nakata has no ability to remember much, and he is shown to be free, albeit dysfunctional in this modern world.  Interesting was how Murakami moved this concept of memory into the afterlife, deeming all worldly recollections as unnecessary.  This releases us.

Seeing the pain of debilitation as my friend with Alzheimers struggles to square the circles in her battles to recall, it was comforting to think that one day this will no longer matter. I saw Christian theology in much of the final third of the novel, but I think that the book will speak to a universal theology and philosophy and appeal to different readers in different ways.

My colleague loves books that have an element of magical realism.  This one has much of it, where dreams and reality merge and the reader is left wondering which has most significance. There is a bit of a Lord of The Rings quest feel about it, and there is even a stone endowed with much significance. At times, (and I acknowledge that I am a bit of a prude), there was too much explicit sexual content for my sensibilities, but the overriding impression I have of this novel is that it was time worth spending.

I confess that the middle part of the book was a determined rather than an enjoyable read, but, by the final pages I felt encouraged and uplifted. And I wanted to talk about it, as hubby will testify. (He is, as I type, making the lunch so that I can get my bookishness down "on paper" whilst it is still fresh and real, and dare I say it, important in my mind.  I feel like I have read something important, but don't be surprised, if you take the road to the Kafka shore, if you're not entirely able to pinpoint exactly what it is that has so affected you.

And if this is too much bookishness for child 1, let me add that, as well as reading,  I have had a lovely birthday, which has seen delightful additions to my to-read shelf and book tokens to boot. I also got to see the most beautiful carpets of snowdrops at Welford Park (of Bake-off tent fame) and hubby and I came 3rd in a London Underground Treasure Hunt!

I'm off to peruse that shelf now.  I reckon I can squeeze in one more novel before I need to start on the next book club read!