Post 48: Half of a Yellow Sun by Chimamanda Ngozi Adichie

I am not a fan of January.  In fact, I am not a fan of winter at all.  Despite the cosy evenings that make reading a more permissable activity, winter just seems to go on for too long.  My trowel hand is itching for a warmer day to dig around in the soil and speed springtime on its way.

And so it was with delight and relief that hubby and I managed a sneaky midweek stay in Brighton last week.  We arrived in dense fog, where our romantic sea view looked out on nothing but murk. Allegedly, we were a stone's throw from the beach.

We were stoic. We were British.  We wrapped up in a comedy of layers and headed out for an evening of Cafe Nero soup and coffee before going to The Old Market to the live recording of Lou Fellingham's latest album This Changes Everything.  A live album, and we were there, right at the front singing along.  The applause on that CD, when it is released, is ours!

It was a brilliant evening. The music was great and the musicians were friendly, making us feel very much a part of what was going on.  We had never been to a live recording before so weren't sure if we'd be encouraged to sing along, or whether we'd just have to be a polite audience, keeping mousy quiet so as not to interfere in the technical stuff.

It was great fun.  They ran through the whole album in one go, interspersing the worship songs with chat, bible readings and prayer.  There were only three repeats needed for the final take and we were on our way.  It was a brilliant evening, and I amassed many wife-points for making the tickets appear in  Hubby's Christmas stocking.

And hallellujah and praise the Lord, the fog had lifted and we were pretty sure that we could see the sea.  The problem now was that it was late and dark.  But we're British, and having missed the sea on arrival, we were just going to make sure that it was there, as promised in the sunny photos of the Granville Hotel.
So we giggled our way down the pebbly beach (or stony, depending on your opinion...I am firmly in the pebbly camp, hubby is not!), sliding through the undulations until we reached the shore.  There is something magical about the white of the foam in the night.  Incandescent is an overused word, but that is what it was. The light was eerie and shimmering as the waves rolled laconically towards the shore.
And in the morning, miraculously, the sun shone.  It was a glorious day, so lovely that we felt it necessary to take out two blue stripy deckchairs and eat fish and chips on the pier!  Such a contrast to the day before. 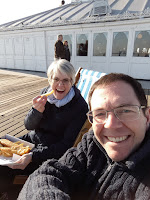 So for a day at least, winter wasn't bad at all, (probably because it felt like spring!) and we really enjoyed being way from it all for 24 hours.

So refreshed and perhaps a little less grumpy than of late I headed home with just a few chapters left of Half of a Yellow Sun.  I've said before that literature, especially fiction, has capacity both to inform and challenge readers.  Fiction has a mass audience and it has a power to change the way that we think.  This is one such book.  Told through the privileged eyes of Lagos-born Olanna, her  house boy, Ugwu and her sister's partner, British-born Richard, the book allows the civil war of Nigeria to unfold.  Based on true events that overwhelmed the country from 1967-70, this novel tells a story that I had not heard before.

It is not unusual for news of African and Asian nations to fall down the schedule or disappear completely, even now.  How many of us give much thought to the horrors in Burundi, the hunger in South Sudan and the starving in the Yemen?  All of this is current, and yet to look at our TV screens, our inboxes and our social media streams, it would appear that the only news is Donald Trump.  And so the most vulnerable and dispossessed are forgotten, they don't even impinge on our conscience.

That is how I felt when reading this.  I am ashamed to say that I knew nothing of this conflict, and am uncertain whether I had ever even heard of Biafra, the breakaway state that longed to be independent from Nigeria. I was born as the conflict ended, but it has never entered my history books.  In fact, the first time I was made conscious of Nigeria other than as just another African placename, was through Adichie's other novel, Purple Hibiscus.  That one has children as its main characters and I read it when my son was given it as his GCSE text.  It served as a powerful introduction to the potentially corrupting influences of foreign missionaries, and made me eager to read this novel.

Olanna spends significant time teaching the children of Biafra in makeshift classrooms and refugee camps, teaching them English and patriotism inbetween bombing raids. "She taught them about the Biafran flag..red was the blood of the siblings massacred in the north, black was for mourning them, green was for the prosperity Biafra would have, and, finally, the half of the yellow sun stood for the glorious future."

This book doesn't shy away from atrocities, indeed some are even committed by the central characters, but it doesn't indulge in them either.  There is a matter-of-fact tone that reports deaths, bullets, lice and disease, but underpinning it all is a hearty compassion.  This compassion is felt between friends and strangers. In many cases, all they have in common is hope for an independent nation that they cannot allow themselves to believe might fail.

The story is cleverly woven, beginning before the conflict and setting up the difficult relationship between Olanna and her twin sister Kainene.  The imposing character of Odenigbo is introduced as Olanna's lover.  Both families disapprove of the match and this tension is a backdrop for the national crisis that ensues.  Ogwu is Odenigbo's houseboy.  His differing social class enables us to see another side of life in Nigeria and the cultural tensions that existed between the educated and those still steeped in village tradition and spirit worship.  The western-centric Lagos life introduces Richard, a Briton whose love for Africa has inspired him to study the language and culture and make Lagos and later Nsukka, his home. His white skin and privilege do not make him immune from the suffering endured by the baby nation of Biafra, and he serves to give yet another perspective on the conflict.

As much as the civil war is the untold story that Adichie implores us "never to forget," it remains the backdrop to a compelling human story. The interwoven lives of the protagonists make you turn page after page. Amidst the bombs, there is fear, there is jealousy and recrimination.  There are people attempting to live their lives as best they can.

The structure of the novel works well.  We arrive in the early sixties when Ugwu begins his services to the esteemed lecturer of Nsukka University.  The gruff kindness he receives from Odenigbo warms us to both characters.  Odenigbo's house is one where fellow academics meet freely to debate politics and share differing opinions.  The food and drink are plentiful and it provides a stark contrast to later deprivations when sharing political opinion is dangerous. Once characters are established, part two moves to the late sixties and tensions in the house seem to be high, but we are uncertain why. Against personal conflict the civil war emerges as the force of change, but many questions remain unanswered.  Dipping back to the sanctity of the early decade, Adichie builds more context around the protagonists which leads to the closing section where civil war reaches its peak and is then ended.
The final pages show the initial aftermath of the ceasefire and the reader is left with a full account of each of the characters.

Realism makes this a profoundly sad read, as we are faced with what human beings can do to one another.  Maybe it was also a timely read as we look about us at an increasingly unstable political future.  One sighs and wonders whether we will ever learn the lessons of a complex, bloody and violent history that embraces us all. 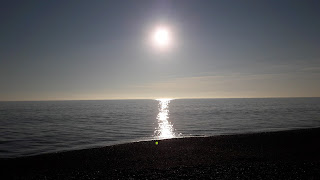 This is a modern classic.  Read and be compelled by finely drawn, convincing character. Read and be challenged by our own ignorance and silent complicity.  The power of fiction.

I leave you with the Biafran symbol of hope.  A sun shining over the beach at Brighton, giving winter warmth as if to say, all will be well.