I do like it when year 13 go on study leave.  I have much more time for reading! I also like the fact that the dreary weather of half term has been replaced (for a few days at least) with summer!  So I have been unashamedly making use of the decking by being decidedly lazy.  There is something about summertime and books that really encourages relaxation. So I have begun work on my summertime glow and read the latest book in record time. 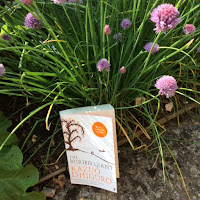 Having really enjoyed the novel, Never Let Me Go, I was really looking forward to Ishiguro's latest  title, The Buried Giant. It is a very different experience!  This novel is part fable, part myth, part legend, part timeless comment on the human condition.

I have to confess at this point, that I am not a fable genre fan. When Sir Gawain made his first appearance as a character in the novel, I felt my toes curl with excruciating remembrance of my first year as an undergraduate when I had to read the text in its Middle English form.  Not my finest hour.

However, this book grew on me.  Ishiguro is a very talented writer and this book woos the reader.  It is beautifully lyrical, and I agree with the Evening Standard comment on the blurb, that it can be described as "even hypnotic" at times.  That said, this book benefits from a speedy read.  If I had taken too long over the novel, I think I may have got bored.  I set myself a 100 page a day target, and this was well rewarded.

The central characters are Axl and Beatrice.  They are Britons and they live in the uneasy times following the departure of the Romans from the country.  Their home is described rather like a warren tunnelled into the ground.  I couldn't help but visualise the teletubby house as I read the opening descriptions!  The novel opens with a description of their relationship.  It is a tender depiction of a long marriage, with Axl lovingly protective of his wife.  He looks at her as she is sleeping and yearns to share his thoughts, ideas and plans with her when she wakes.

Though elderly, they decide to undertake a journey that will lead them to their son.  The complication is one of remembrance. Described like a mist or a fog, there seems to be an external force that is robbing Axl and Beatrice of the ability to recall their past with any degree of certainty.  I first read this as a metaphor for old age and dementia, but it soon becomes apparent that they are not the only ones affected by it. They both have a conviction that they once had a son, but this conviction wavers in its strength as they travel.  Neither is confident about what happened to him or why he left their village, but they both recognise that now is the right time to seek him.

And so the novel becomes Odysseyian in its telling: it is all about the journey and who they meet on the way.  Key characters are Wistan, the Saxon warrior and his apprentice, Edwin.  They become travel companions and, despite the old age and slowness of Axl and his wife, Wistan is keen to keep them by his side.  The reason for this is not apparent until much later, but Wistan is particularly intrigued by Axl, thinking that his face stirs some long forgotten memory.

Sir Gawain is the other significant character on this journey.  Whilst Axl and Beatrice only seek their son, it is claimed that he, Wistan and Edwin are set out to slay the mighty she-dragon, Querig. This is Gawain's last order given to him by his Lord, King Arthur, and he paces the countryside in his armour, seeking to do his duty.

The journey, as any of its genre, is fraught with difficulty.  There are raids, pixies, hags and turbulent weather to deal with, and all the time, Beatrice grows more frail.  At its centre however, remains Axl and his wife.  Their love is tender, and this tenderness is conveyed more wholly, by their concern that they might be parted.  As they walk part of the journey alone and in single file, there is a continual refrain between them, '"Are you still there, Axl?" to which he would respond, "Still here, Princess."
As they journey, there is sometimes a moment of clarity through the mists of forgetfulness and either one will recall an instant from their past.  It remains partially veiled until the end, and the reader is left to work out what might have happened to them and particularly, to their son.

The ending is poignant, and deserves much discussion.  I have committed to no spoilers in this blog and I am not going to deviate from this. But this one is difficult for me, because I really want to chat with you about the final chapter.  There is no doubting its tenderness but there is scope for interpretation.  If, once you have the read the novel for yourselves ( and I'm hoping some of you will have already done so) then please find me on twitter at @karenmartinread to let me know your thoughts.

This was a very satisfying read.  My recommendation is that you take it at full tilt, enjoy the language and allow yourself to be immersed in ancient times and ways.  The timelessness comes in the depiction of Axl and Beatrice and the nature of love.  The warrior and his apprentice also reveal a timelessness about the nature of revenge and need to conquer.

Absolutely not my genre of choice, but a magnificent novel all the same.
Posted by Karen Martin at 13:55