Post 29: We Are Completely Beside Ourselves by Karen Joy Fowler

I know I waxed lyrical about my Faber and Faber course in my last post, but this novel was also part of the recommended reading.  I started it on the train home from London and finished about a week later.  It was certainly interesting, and very surprising! We Are Completely Beside Ourselves was recommended because of its original structure. Indeed the
final sentences of the prologue read, "Skip the beginning.  Start in the middle." And chapter one opens, "So the middle of my story comes in the winter of 1996." This is definitely unorthodox, but it works! Indeed, had Karen Joy Fowler begun at the beginning, I may never have got past the first chapter.  That's not to say that the story is bad; it isn't, but it is based on quite a bizarre plot line.

And speaking of bizarre, I am typing this in my very own room of requirement, (if you don't get this allusion, then shame on you!). The entire contents of my lounge and the fondly named man-room are now piled floor to ceiling in the conservatory whilst those rooms are draped in shrouds to protect the carpet from paint as the walls and ceilings get a well deserved spruce up after at least a decade. 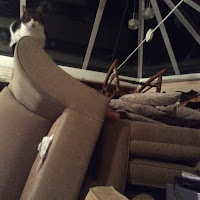 The cat is enjoying herself in her new adventure playground.  I looked up just now to see her perched on the arm of the settee....only the said sofa is upended and about 6ft high!  She glanced at me haughtily and proceeded to jump onto the top of each bookcase as if to thank us for providing another staircase for her to climb, until deciding to settle on my lap.

As if that wasn't enough, the wind is howling down the side alley and the power has flicked on and off several times. So a surreal environment to write about quite a strange book!

And to top it all, this review is very tricky to write,as the no-spoilers is very difficult indeed.  The main subject matter is the very surprise that greeted me at the beginning of part 2, chapter 5.  This, my Kindle App informs me, is 24% through the novel. There is a revelation which I was in no way expecting, (this troubles me somewhat, as I pride myself at being something of a dab hand in reading inference and spotting a foreshadowing at ten paces!) and I cannot tell you what it is. Perhaps we had better form a secret club of those-who-have-read-this-book, and we can swap experiences!

There is good reason for the subterfuge.  We form connections with the family on whom the story is centred and we perceive them from Rose's viewpoint.The book opens with Rosie referencing herself almost as an only child.  It states in the opening chapter that she had not seen her brother in ten years and it had been seventeen since her sister had disappeared.  This is clearly an effective hook, and the novel works on that curiosity.  Why did they go?  Was the quitting of the family home the same for both Lowell and Fern?  And these questions continue to drive the novel.  We find out about each sibling in bits.  Lowell was around longer than Fern, but he often spent nights away and was angry at his parents.  Rosie is compliant and learns to keep quiet, but Fern's disappearance remains a mystery until much later in the novel.

And that is about as much as I can tell you.  We meet Rosie at college where she gets into minor scrapes with the law, and becomes friends with the distinctly off-the-wall character of Harlow. There are drunken crawls, lost suitcases, a bizarre motif of a ventriloquist's dummy, university science departments, psychology and that other thing.....

Perhaps needless to say, this is a curious read,but it is one that will get you thinking.  I would have struggled to suspend disbelief if the story had started at the beginning, but I was so hooked that by the time of the revelation I did little more than exclaim to my husband and then read on.  But I did exclaim, and he now knows the central premise.  His response , "And you're still reading?!" might make you even more curious to pick it up and give it a go.

This is an unconventional story told in an unconventional manner, but it stays with you, as you are forced to consider what it is that makes us what we are. And with an unconventional link, I will admit that I am not very far into my next read, Solar by Ian McEwan.  That is because I have been distracted by making novelty cakes again. This was my swansong...my youngest was 18 last weekend and I officially have children no longer. So my final hurrah in the birthday cake department was this Smaug cake, constructed to accompany the 22 hour Lord of the Rings film marathon undertaken by Child 2 and his friends!  So something that has made me intrinsically what I am...motherhood...is officially over.  I have a sneaky suspicion however that that role is never fully signed off.  So I am proud of them.  Good job done, but I am still very much Mum!