As half term draws to a close, I am bemused by how little I have managed to read.  I have completed Sebastian Faulks A Possible Life but very little else!  We have visited child 1 in Sheffield where we enjoyed a gentle Peak walk, avoiding the downpours that seemed to be plaguing everyone else's weekend! We ate Bakewell tart in Bakewell and came home with a Bakewell pudding and a bulging bag of Roly's Fudge. (And yes, the link does have a mail order section should you too, wish to sample the sugary delights!) We also bought a giant apple pastry, which, when cut open revealed a whole apple, stuffed with mincemeat, surrounded by puff pastry and sugar crystals.  It seems God placed the Peaks in the right place to walk off all these delicacies!

We also made a very wet trip to Birmingham University with child 2.  It must be a lovely place, because we managed to like it even though there wasn't a minute of the day when the rain ceased to fall.  I cannot recommend Poundland £1 umbrellas though....it lasted 45 minutes and then was unceremoniously dumped in the physics faculty bin.  I spent the rest of the day with a scarf over my head which child 2 informed me, as we returned to the car at the end of the visit, made me look about 90. (I am not 90, in case anyone was wondering!) 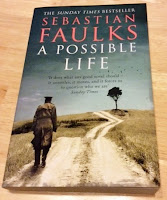 Both the vast landscapes of the Peak District and the red brick grandeur of the university at Birmingham serve to remind us that we are a small part of something continuous. Indeed, that is the overriding message of A Possible Life. Though a novel, it is really a series of short stories. Interestingly, if it had been marketed as such, I may not have picked it up from the shelf.  I did spend time trying to forge links between the stories and find connections between the characters. At best I would say, there is an echo of past lives in every life we are asked to share. The remote farm house of part one is revisited in part four and the workhouse of part two is resurrected in the modern London conversions in the final story.  So there is palimpsest, but it is gentle, subtle and perhaps too much so. Needless to say, it serves to awaken that awareness in us, that we are not the first, we will not be the last and there may be an echo of our lives, through
attitude or artefact, that we leave behind for others.

We are first introduced to Geoffrey Talbot, a young man who sought adventure in the french resistance. His slightly frivolous narrative was redolent of Bertie Wooster, a lighthearted somewhat gung-ho recounting of a young man's quest to make life more interesting. I felt slightly wrongfooted by this, knowing the weight of history given to us by world war 2, but the voice became increasingly convincing. As his experiences became less Biggles and more reality, the tone darkened as he sought to escape the horrors of a Nazi concentration camp in Poland by forcing himself to remember lazy English days on a village cricket green. The essence of Geoffrey Talbot became that of an ordinary man flung into extraordinary circumstances.  As such, it told the tale of war with poignancy and effectiveness. Touching too, was Faulks' expression of human kindness. The loneliness induced by war and the suffering that continued long after the emancipation of the concentration camps was alleviated by an impromptu visit and gift from one of Geoffrey's former pupils.  This touching of one life upon another is the essence of the novel.

Reading this novel can be frustrating.  Each protagonist is finely drawn and could be the subject of a full length tale.  You immerse yourself in one character and are then assaulted by the need to shift to a different character, time and setting.  There are five tales in all. The second story focuses on Billy, who is given over to the workhouse as his parents cannot afford to support all their children.  This is beautifully constructed and conveys timeless humanity as Billy reaches out for comfort in his loneliness, and then, in turn, reaches out to others. There is however, a ruthlessness in him.  This  can be seen in the way he deals with poor paying tenants, again showing that we are all a product of where we come from.  The relationship he shares with his wife and "the second sister" is also tenderly evoked, with compassion being the overriding sentiment of the story.

Part three fast tracks to 2029 where Elena Duranti is part of a ground breaking scientific discovery that explains what it is to be human. "On the fourth day, they discovered the truth. The defining quality of human consciousness, the thing that had given the world Leonardo, Mozart, Shakespeare and had made humans little lower than the angels, was not an entity, but a connection." (pg 152) This section almost seeks to reduce humanity by making it explainable, but Elena's personal life and emotional responses belie her science whilst also confirming it.

Part four is the shortest, and was my least favourite tale.  Its protagonist is Jeanne, and she is a servant in a rural french household. Her background is shady and poor, and there has been little opportunity for education.  She is regarded as ignorant, but held in some affection.  Marcel, first her ward and then her master, is kind to her throughout her life.  Jeanne does not set out to seek answers as Elena does, but she is drawn to religion, first through the monastery as a young woman and then by the biblical tales recounted by Marcel.  But even this quest for meaning is tainted. Brother Bernard's interest in Jeanne, though never explicit, has pragmatics of sexual exploitation.  Jeanne, it seems, never had control over any aspect of her own existence.

That is not the case in part five, which is a modern love story set in New York, LA and a rural farmhouse in what appears to be New England. Here a rising star is nurtured by producers and fellow musicians, enabling her to break in to musical success in Britain and the States. Anya is a complex character who latches onto Jack.  It is Jack who tells the story.  It is interesting that because Anya calls him Freddy, the reader identifies with him in the same way that she does.  She constructs him and makes him who she needs him to be. He turns his back on Lowri, dazzled by Anya.  Faulks again shows consummate skill in evoking convincing and tender relationships, and we understand Freddy's attraction to Anya.  It is, in part, a desire to protect her, but it is nonetheless Anya who has control. Control however, does not equate to contentment and her music reflects her own inner struggles.

The book weaves lives.  It creates a clear snapshot of an existence and almost subliminally suggests that we are all linked.  Perhaps it is as tenuous as our common humanity.  That, in some respects, merely being human means that we have some interdependence, some connection with all that comes before us and all that will follow. I have read that this is not a happy book, but I don't think that it is sad either.  It places us in time, and makes us imagine our own story.  It suggests that we are limited by the influences of our past, but also tantalises us with the possibilities of what our own short lives might encompass.

You may remember that one of my favourite English words is palimpsest.  Since first reading it on the opening page of The Handmaid's Tale by Margaret Atwood, I have been astonished by how useful it is.  And so A Possible Life shows us how each of our lives will be a palimpsest for what comes after, and our own existence owes much to what has already gone before.

Perhaps I am being a little too whimsical and philosophical, perhaps I dug too deep for connections between the stories, but that there is a thread of life holding all humanity together was my overriding response to the novel.  Faulks is a natural story teller, and this collection makes us consider who we are, where we come from and where we are heading to.