Post Number 15: A Medley of Middlemarch, The Storyteller and How To Be Both


July seems to have rushed past without a blog entry.  I'm not entirely sure why as I haven't actually stopped reading! I have however, been reprimanded by my slow consumption of novels.  For that, we can all have regrets! I think the reason is a combination of too many hobbies, (people will keep asking me to make cake and the garden just keeps on growing!) and the occasional need to push the hoover round the house and actually do some teaching, marking etc.  I am also not a speed reader, and prefer meandering through a plot rather than a motor through that misses spectacular views along the way. 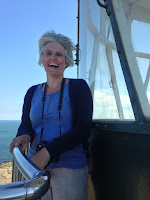 Speaking of which, we have just returned from a trip to Normandy en famille, where we saw some amazing sights.  Mont St Michel is a fairy tale picture rising up from the sea, and I thought that would be my photo moment of the holiday, but then we climbed the  lighthouse at Barfleur (the westernmost tip of the Cherbourg peninsula), and the views across the sea, down the coastline and back over the land were breathtaking.  It was also very windy and very high, so the exhilaration factor put a broad smile on my face, (even if hubby's "I'm at the top" smile was more of a tenacious grimace!)

Back to books then.  I slogged through George Eliot's Middlemarch again through June. I had beautifully neat undergraduate chapter notes throughout and I remember loving it back then.  And, whilst it remains a classic and an interesting study of English life and people, I was never gripped.  I confess to downloading the audio version so that I could tick off some chapters whilst walking to school and cooking dinner! That sped up the "reading" process and momentum is

essential if you are to take on such a weighty tome.  It is that momentum which I find hard to grasp hold of in everyday life.  I still find that reading is an antisocial pastime; by necessity it shuts out everyone else, so I tend to do most of it in the 15 minutes to half an hour before bed.  Such stitled consumption is not the best way to read, especially when some nights, my poor eyes won't allow me much beyond a single chapter, (sometimes even a single page)! So, to avoid totally denegrating George Eliot, I must hark back to halycon days of student life, when my whole existence was centred around a reading list. Lectures were 4 per week and seminars the same, so most of my time was spent with my head in a book in the Hartley Library (5th floor, bay window overlooking the main campus).  Read so indulgently, Middlemarch will bring its rewards.

Onto my first read that nudged into "official holiday reading time." This was The Storyteller by Jodi Picoult. Here, she adopts her usual style of a different narrator for different chapters, but I loved the fact that some of the chapters were very long, enabling key characters to tell all of their story rather than dividing it up.  This was particularly the case with Minka's tale; a harrowing story of holocaust survival. I dislike the sensationalist way that Picoult promotes her books.  Even her official website begins with such a blurb. The questions are not how can you live next to such evil? Will she bring herself to do what he asks? Rather they are about humanity and its extremes.  The book serves a new audience, bringing a key part of history to the popular novel, and she writes well.  This book is not sensationalist,and this is why I baulk at its advertising.  If you have done the same, then I urge you to reconsider adding this book to your summer reading lists.  The novel works on several levels, one being about narratives themselves. Grandma Minka used to write tales herself, and one of her stories forms a narrative that weaves through the contemporary storytelling.  At first this seems like an unnecessary intrusion, but ultimately it serves a bigger purpose to bring the various plot strands together. The title is apt, considering carefully how we use stories and narratives, how all of our lives are made up of storytelling in some way or another.
And the ending? I confess to being disappointed at first. The protagonist Sage Singer (silly names for all the modern characters I'm afraid) seems to be condemned to a life of lies, or at least, a life of shadows.  This seemed unfair and I wanted (surprise, surprise to anyone who knows me) a more uplifting conclusion.  But as I strolled to the patisserie boulangerie to get my morning croissants, my head was filled with Sage Singer and her conclusion, and I think it was a most fitting end.  Like her Grandmother, there are things that she will choose not to tell, and like her Grandmother, she will choose silence to protect those around her. 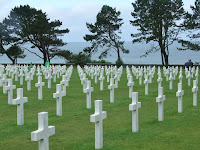 Reading about the holocaust whilst on holiday in Normandy had an added poignancy.  We visited the Dday beaches of Omaha, Utah and Gold and saw the graves of thousands at the American, English and German Cemeteries. So many sacrifices for freedom and democracy. The stories of the Ghetto and the Concentration Camp in German-occupied Poland, retold so well in Picoult's novel, underlined the reason that the allied forces needed to regain France and conquer Hitler.  The German cemetery was also poignant.  It is beautifully kept and has an appalling record of the total numbers that have been killed in WW1, WW2 and subsequent conflicts.  Humanity does not have a good track record. Poignant too is the acknowledgement that many of those in uniform for the Nazi machine, were conscripted and participating in a war that they would never have chosen.  Picoult too brings out simultaneously the compassion and the cruelty that existed behind the Nazi machine of war.

And onto a complete shift of gear, I moved into Renissance art and contemporary narrative with Ali Smith's How to be Both. I was intrigued by this, as the narrative is experimental.  Those of you who have been loyal blog readers from the start will know that I like this. But I'm not sure that it fully worked.  The idea is that different readers will buy the book and some will purchase a text beginining from the perspective of "Eye" and others will have a novel that begins from that of "Camera." I read on Kindle which meant that I had the choice.  I chose "Eye" first because logic told me that without the eye then the camera is nothing.  Discussion with my family threw doubt on my premise however as the cliche about the camera never lying belies the eye itself. Still, I went with my first instinct and read the "eye" first.
This narrator it soon transpires, is speaking from the grave. He is an artist of the Renaissance and struggling to make a living.  We hear of his adventures, his friends and his painting.  Some of his lines are written in poetry to create a further form of art within art. He is an interesting voice and the revelation about his character is beautifully created, teasing the reader through implication before final revelation is achieved. His narrative then includes a modern teenage girl whom he seems attached to.  It is through her that he can have a viewpoint on modern life. And yet, he does just observe, rather than comment. I particularly enjoyed a renaissance description of mobile phones!
The modern narrative is also well constructed and is focused on a mature teenager who is grieving the loss of her mother. The art of the "Eye" forms the cohesion of the text, providing a link between the two narrators.  That however, is not the most significant link.  Here the reader does the most work, and I imagine the points of discussion around the comparisons between the two protagonists is almost limitless as different readers will make different connections. The idea is that readers will have different interpretations dependent on which way round they read the novel.  If anyone has read it "Camera" first, I would love to hear your ideas. I intended to read it twice, made very easy in the Kindle version, but that doesn't fully show me whether the empathy and connections made would be different because I can't unknow what has happened from my first reading!
I loved the experiment in narration, but wasn't happy with the ending. There wasn't one really, and that is a problem for me. Yes, I can fill in the blanks, I can justify it, but I wanted a full meeting of ideas, concepts and ideologies between the two timeframes and the two protagonists. Interesting, but not for those who like closure...and a bit arty and experimental for those like my husband, who like their fiction just a little more straightforward!
Posted by Karen Martin at 08:10